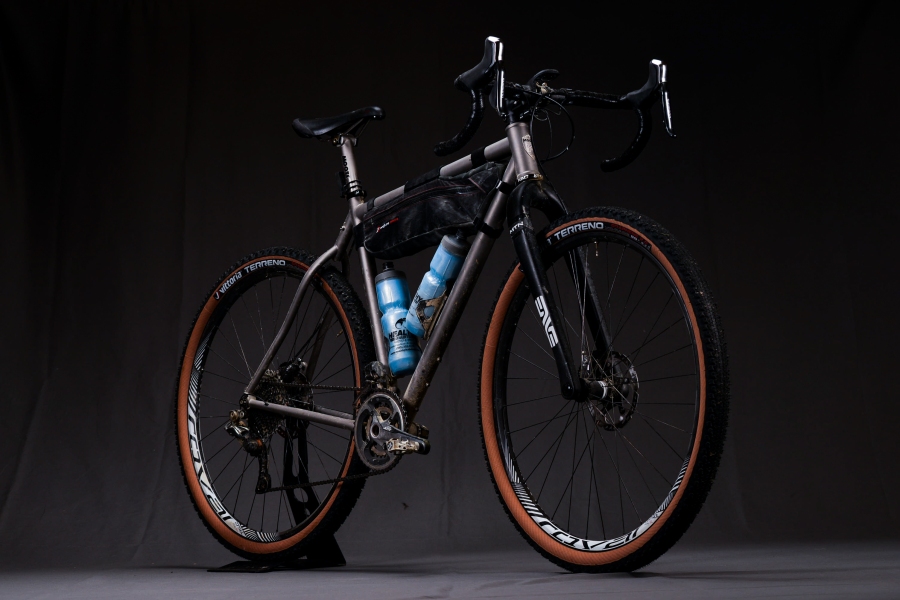 The story behind Bruce’s titanium Monster Moots is more a tale about a bike that’s no longer here—Bruce’s original custom gravel rig: the Teesdale Monster bike built in 2004 by designer Tom Teesdale from West Branch. The idea for the Teesdale was born out of years of riding gravel, which he started doing in the early to mid 90s as a way of conditioning for single track racing.

Tired of the common hardtails of the day, Bruce collaborated on a design he dreamed up for himself (and a second for fellow rider Greg Aronson, owner of Coffee Hound). The Teesdale started with countless different setups due to its ability to swap not only between flatbars and dropbars but rigid and suspension forks. “It did everything ‘OK,’ but not quite perfect,” Bruce said.

Finding components to work between the different setups was a challenge in the early 2000s. At one point the Teesdale had Campy Record shifters, a SRAM rear derailleur and Shimano front derailleur. “That’s why they called them Monster bikes,” he explained, “because they truly were Frankenbikes. With that setup, “I actually had to change the rear derailleur angle so it would throw right,” Bruce said, laughing. “That’s the kinda shit you do to your own bike to make it work right.”

Over eight years, Bruce would put the aluminum Teesdale through paces few frames would survive: placing 27th in the open mens field at the 2010 Dirty Kanza, several Chequamagon mountain bike races, Leadville 100 and the first TransIowa, to name a few. Bruce then leaned into the singlespeed zone, eventually selling the Teesdale frame to the designer’s daughter. “I actually raced singlespeed for three years and started riding full suspension mountain bikes.”

After the Teesdale was gone, Bruce rode stock geometry bikes all the while chewing on bike specs and what he’d do differently, given the chance. That chance came along in 2015 while talking with previous employee Jeremiah Ganzer, now working for Moots in Colorado. The designing began and in 2017 the titanium Monster Moots hit the gravel.

Built up with an old school XTR 2x crankset with 42/28 chainrings and a newer XTR rear derailleur and newer Di2 shifters, Bruce polished off the build with Roval Traverse SL carbon wheels set up tubeless with the semi-slick mountain racing tire from Vittoria. “I built it not just to be fast, but to be fast and comfortable.”

Like the Teesdale, the Monster Moots can run rigid or suspension forks, “but I have enough mountain bikes that I just haven’t found the fork with the amount of shorter travel that I want.” It can only run drop handlebars. Bruce has yet to put the longer distances on the Monster Moots like the Teesdale, “When I leave here, I’m usually going through the dirt trails of Crow Creek Park and heading straight for the gravel between here and Princeton.

“Sometimes I’ll even take it for a lap at the college. I’m going to be out for at least a couple hours.”

While the Teesdale “did everything OK,” the Monster Moots appears to do EVERYTHING better. “It rides at a level higher,” Bruce explained. “The geometry is better. Everything is better on it.”

Next Thursday, enjoy that extra turkey leg and another slice of pie by putting our inaugural Dirty Turkey Gravel Grind on your post-Thanksgiving radar!

November 30th, the Saturday after the Big Feast, riders will devour either 20 or 40 miles of Scott County gravel, both starting and ending at Healthy Habits/Crawford Brew Works. A group roll out will begin at 11 am following a brief rider meeting INSIDE the shop. The following are links to the 20- and 40-mile routes:  20 mile Dirty Turkey OR 40 mile Dirty Turkey.

This is a self-supported ride. Neither route passes a gas station. Riders should pack enough food and hydration to endure as many as 4 hours of riding, depending on the course chosen. Riders must wear a helmet, run a red, rear blinking light and are encouraged to have a clear, front headlight.

As if gobbling down a bunch of dusty miles weren’t reward enough, gather at Crawford Brew Works afterwards for $2 off your first pint of the newly tapped Crow Creek Cranberry Saison, Tripel, Pedal Your Ass Off or any other tasty beverage. Cushman‘s will be serving food at 4 pm and the rockabilly music of Michael Moncada starts at 6 pm.

We can’t think of a better way to kick off the holiday season than with bikes and beer, food and music! See you all in a week! Join us for another installment of Gravel Riding and fun on Labor Day! (Monday, September 2). The goal as always is good times, with a little side helping of celebrating Bruce’s 20 year anniversary at Healthy Habits! We’ll be leaving from the same spot as Pebbles & Pints.

60 miler starts at 8:00 AM (officially, but you can leave whenever you’d like)

The plan is to have everyone at Crawford Brew Works at 2pm for a taco bar (bring a side dish or desert if you’d like) and some good times. *Bruce is buying the first keg of his new 20 Tooth Tripel for riders to enjoy.*

Here’s a few things about the race:

Location: We’ve attached a map with the start finish marked with a red X. On Middle Road, just North of 80. We have parking for a pretty solid number, and if we do happen to fill it up, I can’t imagine that we can’t stash a few cars at the Bett-Plex. We’re going to have a sign-in so that we make sure that everyone who goes out makes it back in. There will be NO on-course support, so be prepared.

If you do have to leave the course for any reason and don’t make it back to the start/finish, please call 563-265-1025 and let us know. We do plan to sweep the course if not everyone has arrived back at the finish by 2. That means a 7.5 mph average for the 30 miler and 10mph for the 60. We feel that those numbers are pretty reasonable.

Our goal is to have everyone in by 2:00 and then anyone who wants to join us can head to the shop/Crawford to hang out. We’re also going to have a grill available at the start/finish so you can grill something if you so choose. Crawford Brew Works is donating a whole pile of crowlers to us, so there will be some post-race beverages.

About the routes: The gravel is interesting. Yesterday it was pretty soft, but should all be rideable. Weather could make things interesting. We can all see the same forecast, so be prepared. See you on Saturday!

We sure do, and we’ve had the great fortune to have customers that do, too. Today, we’re starting a series of posts sharing them. If you have a dream bike, we can help you make it happen.

The first installment in our dream bike line up is this Chesini Strabia.

For those not familiar with Chesini, they’re an Italian company that specializes in road bikes. The Strabia is their All-Road/Gravel offering.  The Strabia uses a combination of Columbus Spirit and Zona tubing, has clearance for 45mm tires, and uses the latest standards; flat mount brakes and 142×12 and 100×12 thru axles.

We built this one up for fast mid-west gravel with a Campagnolo H11 Groupset. Mechanical shifting matched with hydraulic disc brakes, a 50/34 crankset, and a pair of fast rolling Vittoria Terreno Dry tires set up tubeless on Roval C38 wheels. A Chris King Headset; 3T Superergo carbon bars, ARX LTD stem and seatpost; Lizard Skins bartape, and a gorgeous Brooks Swift Saddle round out the build. 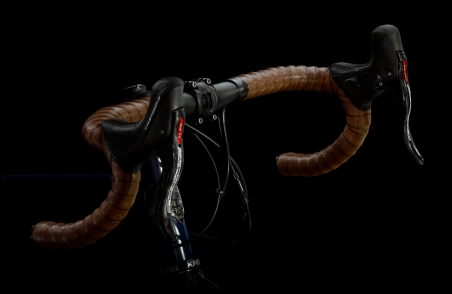 We’re looking forward to the weather clearing and a ride report, but when we test rode the bike it was awesome! 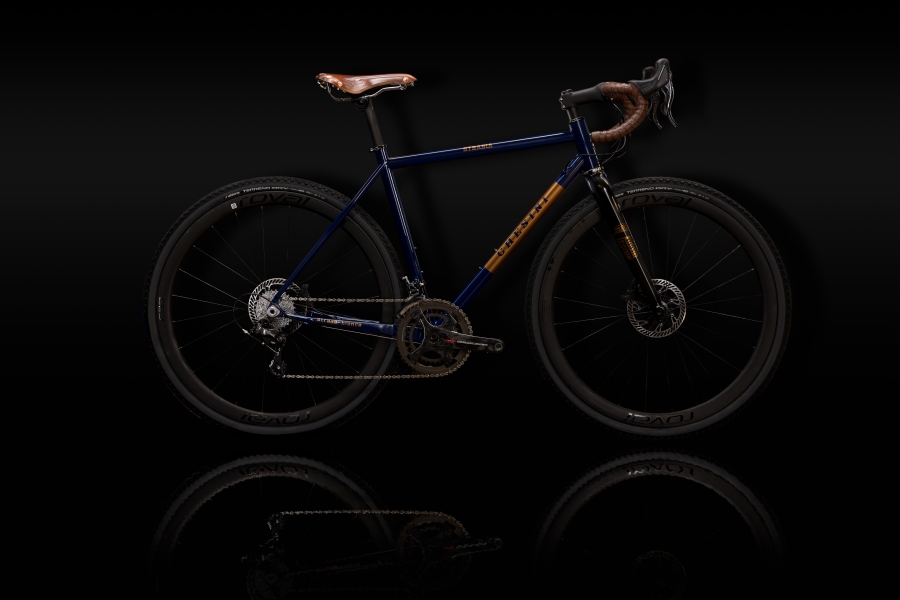 Check back for more updates, we have a few more of these coming! Want one of your own? Give us a call!